How have we humans become the Earth’s dominant species- through our innate intelligence and our superior mental abilities?

Not so, says Harvard’s Joe Henrich in The Secret of Our Success.

Surprisingly, primates such as chimpanzees actually eclipse humans in many forms of fluid intelligence, including working memory and information processing speed. Primates also perform better in various behavioural game theory experiments (strategic economic games). Additionally, despite the complexities of modern society and the multitude of skills we are able to acquire, we  modern humans are  virtually helpless as lone individuals, and unable to master the most basic of survival skills in the wild.

So what is the source of our ecological dominance?

Henrich presents a convincing thesis that it is our hyper sociality – that is, our social learning capabilities and our ability to acquire culturally accumulated know-how. Through an examination of lost European explorers, hunter-gatherers and small scale societies, Henrich demonstrates that cumulative cultural evolution– the accumulating body of information and its cultural products (covering all domains of life, such as social norms, food processing and hunting, tool manufacture to mate choice), is the driver of our success.

A great illustration of how social learning is our species’ greatest strength is provided by Esther Herrmann et al (2009). The researchers compared performance on a range of cognitive tests on a sample of 106 chimpanzees, 105 two year old children, and 32 orangutans—using 15 cognitive tasks that posed problems about the physical or social world. 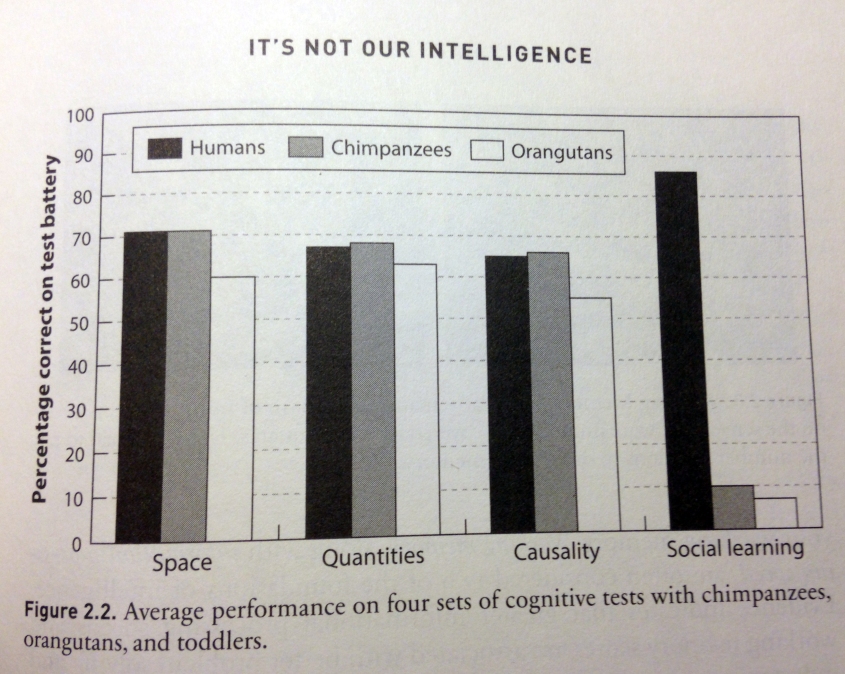 The chart above (p. 15) makes clear the discrepancy in social learning abilities. Henrich explains that we humans are prolific, spontaneous and automatic imitators, where we use cues such as success and prestige to figure out whom to learn from. Conversely, we also copy wasteful or inefficient practices if these steps are performed by high status individuals.

Cumulative cultural evolution manifests into a ‘collective brain’- what Henrich argues is a type of super-organism. The power of these collective brains depends on in part on the size of the group of individuals engaged and on their social interconnectedness. “It’s our collective brains operating over generations, and not the innate inventive power or creative abilities of individual brains, that explain our species’ fancy technologies and massive ecological success.” (p. 212). Henrich clarifies that this process is not linear, and how cultural know-how can be lost if the size of the group and their interconnectedness declines. This phenomenon is dubbed the Tasmanian Effect (reflecting how the aboriginal inhabitants of Tasmania lost their cultural know-how from isolation as the Bass Strait flooded and transformed Tasmania into an island 12,000 years ago).

A great example of cultural differences being biological is the ‘culture of honour’ that remains in southern states of America. Henrich cites the work of Richard Nisbett and Dov Cohen (1996), showing that young American men from southern states react more aggressively when challenged (being bumped into and called an ‘asshole’ in a narrow hallway. How would you react?), with greater spikes in cortisol and testosterone as compared to their Northern counterparts. Nisbett and Cohen’s innovative research illustrates that their aggressive response is because these southerners have inherited a culture of honour from their Irish and Scottish ancestors, where one has to defend their manhood upon provocation. This package of social norms is adaptive and evolved in a world of weak formal institutions- it’s a biological difference, but not a genetic difference (their Irish and Scottish ancestors have since lost their culture of honour).

Henrich argues that cumulative cultural evolution is now the central force of human evolution, and has been for hundreds of thousands of years . One of the classic examples of culture-gene co-evolution provided includes the prevalence of lactose tolerance.With the advent of agriculture and domesticated cattle, genes which permitted the intake of cow’s milk proliferated in Europe, which in turn furthered the uptake of domesticated cattle and milk consumption, creating a feedback loop.

The Secret of Our Success is a tour-de-force and a significant advancement of social science, adding nuance to evolutionary theory whilst challenging both constructivism and traditional evolutionary approaches . Instead of culture being something which contradicts evolutionary science, culture itself can be analysed and modelled as an evolutionary process accordingly. Simultaneously, Henrich challenges the ‘old’ evolutionary approaches, such as Massive Modularity Theory, which only pay lip service to the importance of culture in explaining human behaviour. “My point is that trying to understand the evolution of human anatomy, physiology, and and psychology without considering culture-gene co-evolution would be like studying the evolution of fish while ignoring the fact that fish live, and evolved, underwater.” (p. 317).

We saw big brained explorers repeatedly flounder in environments ranging from the Arctic to the Australian outback. As our heroes sought to confront the recurrent challenges faced by our paleolithic ancestors, like finding food and water, they struggled. No foraging modules fired up and no fire-making instincts kicked in. Mostly, they just fell ill and died as a result of blunders that any local, indigenous adolescent equipped with cultural know-how inherited from earlier generations could easily have avoided. It’s not merely that people in modern society need culture to survive. Hunter-gatherers, as well as other small-scale societies studied by anthropologists, are massively dependent on large scale bodies of cultural know-how, relating to tracking, food processing, hunting and tool manufacture. This expertise is often complex, well-adapted to local challenges, and not casually well understood by most pratitioners… All human societies, whether they live as hunter-gatherers or not, are entirely dependent on culture.” (p. 318, emphasis added).

One is left wishing that Henrich discussed further the implications of cumulative cultural evolution for our future. As Henrich states; “[h]aving crossed the Rubicon, we can’t go back” (p. 217).  Cumulative cultural evolution helps explain how our ancestors spread across the globe despite our physical and mental limitations, and how we have become an ecological force. However, what are the implications for the challenges and opportunities humanity faces, such as climate change, biodiversity loss, nuclear proliferation, advances in artificial intelligence, and genetic engineering of the human genome? Are we not at risk of ‘scoring a lethal own goal’, as Stephen Hawkings put it? It would be interesting to hear Henrich’s thoughts on these issues.

Can this help us build stuff?

Henrich concludes The Secret of Our Success by discussing the implications of cultural evolution for designing new organizations,  institutions and policies (pp. 330-331). I’ve listed these points verbatim below:

To learn more about The Secret of Our Success or to buy a copy, click here.